Between Two Trees is a three-storey residence adapting to a need for varying levels of privacy. The design language of the home focuses on the fusion between Indian and Balinese architectural styles, while playing with natural materials. One is welcomed into the house by two massive trees that become the entrance gateway to the building. 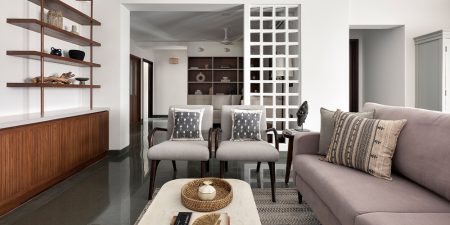 It is home to a family of 4; an elderly couple and their two daughters.  They wanted an extremely functional home with an old-school feel yet not too traditional looking.Our clients were looking for a homely space to carry out their individual and family activities comfortably; a simple apartment that was warm and cosy, a space where they could find a sense of calm from the buzz and stress of city life. 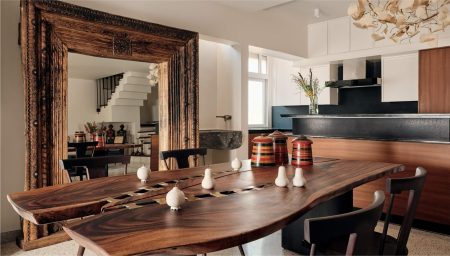 Spread over the second floor and terrace level, the Open-Plan Residence is the resultant of a tryst with Tropical Modernism. Adding much-heightened character to the outdoor terrace are a bespoke red cow sculpture and suspended bronze horse figure alongside furniture by Beruru and The Purple Turtles.

Have a walk through, through this stunning, 25,000 sqft, spanning 2 floors, including 4 guest suites and 1 master suite, a pool, an entertainment gaming area with an outdoor deck.

Colours, prints, plants, lots of sunlight, animals and a super cute pup is all that makes Devika Narain home, what she calls an Indie-Scandanavian home in the middle of the city of dreams, Mumbai. There’s a hidden gem in every corner of her house and we absolutely love that about this space.

When homeowner Radeesh Shetty approached Kavya Sheth of Studio Ruh, he had a one-line brief for his abode’s design — to make it like a home in Sri Lanka. Being personally inspired by Sri Lankan architecture- Shetty who is the founder and director of Beruru, a Bengaluru-based garden lifestyle brand said “Sri Lankan architecture is what I wanted my home to reflect. 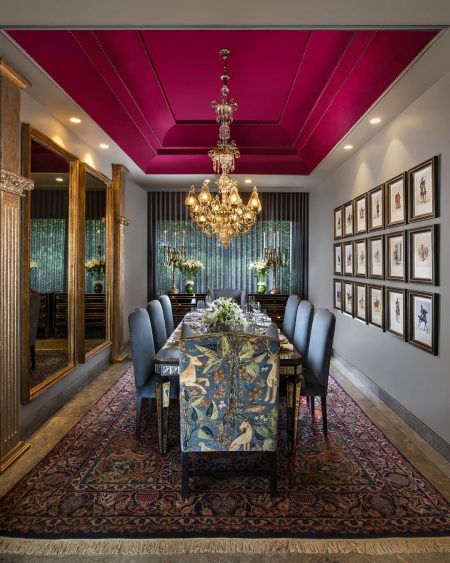 We are all drawn to different decor styles, so it’s imprudent to assume that all extroverts would end up liking loud spaces. However, the law of averages states that our traits do affect our choices, so we’ve taken five broad personality traits to put together distinct and alluring Indian home decor ideas that could appeal to each. 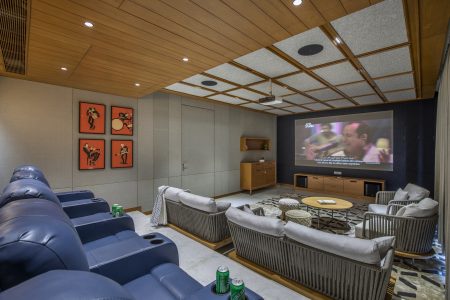 “PUSHPATMA” began at a rather sweet note where the homeowners were a simple, close-knit family who wanted a humble abode; that hits a sugary note with every modern, contemporary as well as culturally-steeped elements. The house comes across as a geometrical riot where different forms of squares, rectangles and circles are visibly juxtaposed. 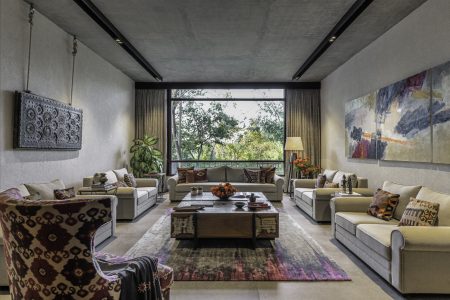 “When we first visited the site, we saw that there was a Lake towards the North, which instantly made us take the decision to have the house opening towards that side. This helped in providing shade to the landscape on the North façade. 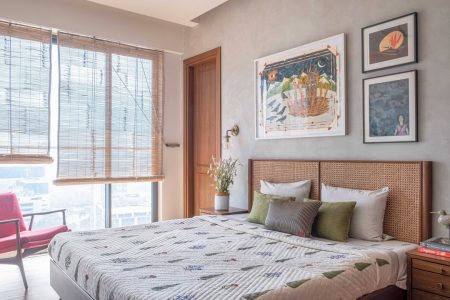 Located in Mumbai’s plush residential and business hub – BKC, the “House of Weaves” is a three-generational family home that presents itself as a tapestry of emotions and a grounded ethos that stems from the identity of its inhabitants. 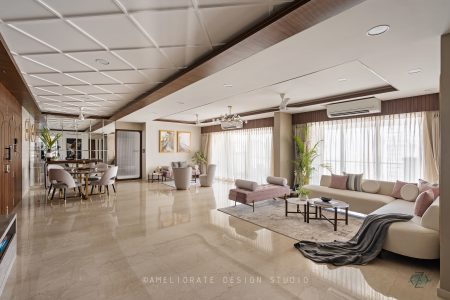 Crafted with elegance & exuding luxury in each detail. A family which is well renowned and reputed, wanted us to help them start their new journey in their massive 3,000 sqft 5-bedroom apartment in Thane, Mumbai. As social members of the society and active participants in social events and gatherings, the Home Owners wanted their home to depict “luxury and sophistication”. 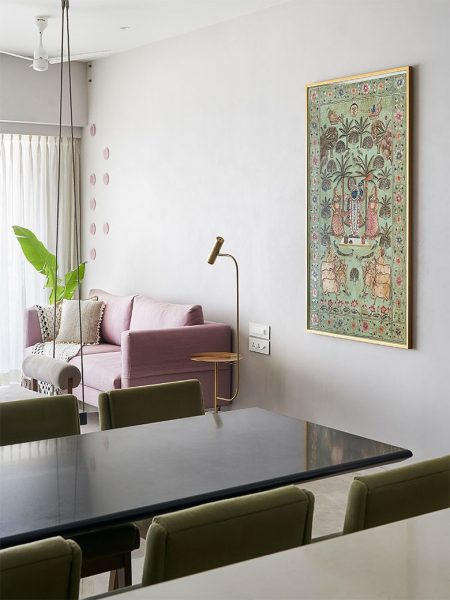 Thinking outside the box, the young and talented co-founders of The PLOT Studio have created this clean and modern home for its young residents. Arpita Dhokia, Tanvi Shah and Dhwani Kanakia were challenged with the task of designing a home on a tight budget which included them having to work around part elements given by the builder and conceal exposed wires and pipes without compromising on the height of the home, a task they completed with an unmatched finesse. 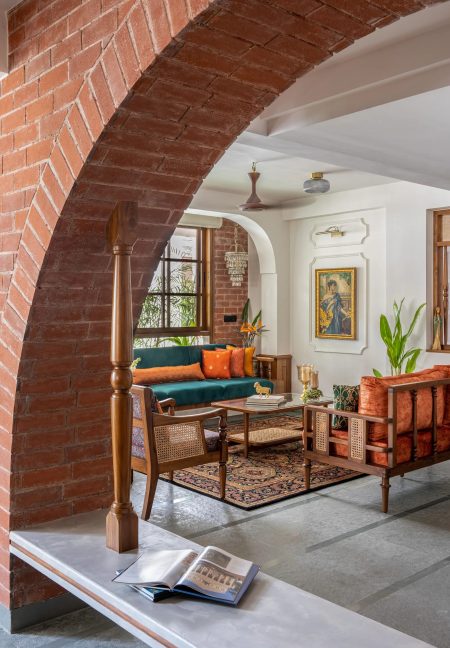 As you enter the Avani residence, leaves graze your elbows and large wood-trimmed windows offer views of lush foliage. Textured Kota flooring in the living and dining spaces caress your feet, you meander through arches and stumble upon an indoor balcony that overlooks a garden. 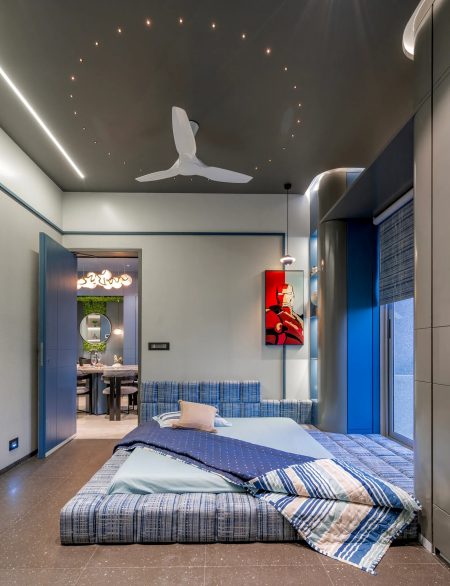 The Surat suburb of Vesu is known for many things: its towering residential enclaves, glittering malls, sprawling business parks and quiet, leafy lanes. What it isn’t quite known for is its coastline—or lack thereof. “But when Devang and Richa’s brief called for bold forms and shades of blue, the coastline was the first thing that came to mind,” quip Sagar Rathod, Mansi Rathod and Ritika Uttamchandani, co-founders and principal architects of Surat-based architecture firm Ground Zero who had been approached by Devang and Richa Mehta to construct a tranquil residence far removed from the hustle and bustle of the city.

This 4BHK, 2550-sq-ft apartment had to be transformed into a home for a family of six: a senior couple, a junior couple and the latter’s two young children. The brief wasn’t elaborate, but its pithy content spelt out the entire design direction: a luxury that is sensed rather than overt, and a home with an Indian heart. 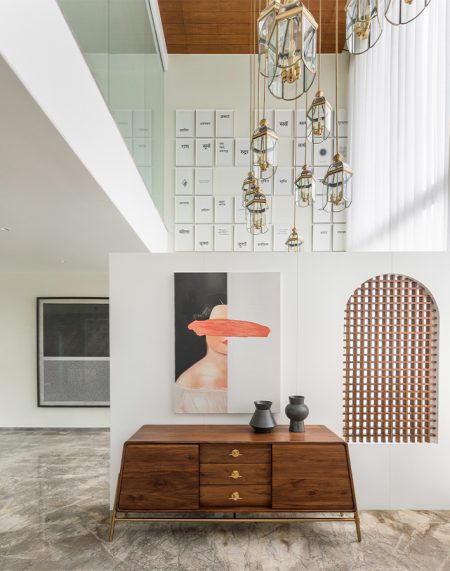 Navigating through a complex ensemble of materials and an unusually dynamic colour palette, this Bharuch home finds its coherent voice in the floral upholstery and designer Italian marble. Designed by Devang Patel and Pratik Siddhpura, Principal Designers of P&D Associates, the 7,130 sq ft home in Bharuch, Gujarat named ‘Anurag’, is an assortment of themes and compositions weaved with a single entity. 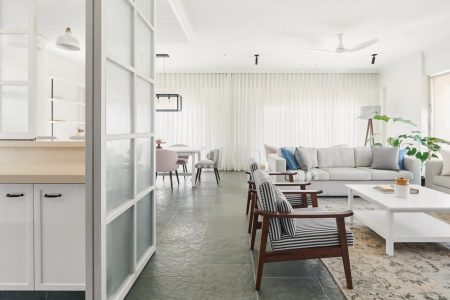 The preciousness of a gift transcends its physical value; the emotions invested in it make its worth inestimable. This tenth-floor apartment in the leafy seaside precinct of Shivaji Park, Mumbai, was such a token of love, from a brother to his parents and sibling, and, therefore, had to be designed just right. 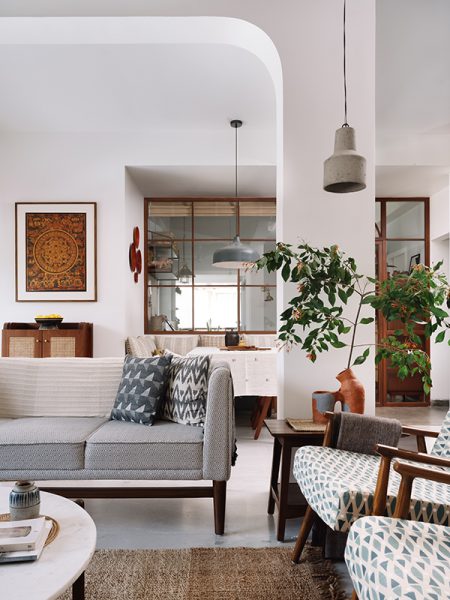 Mixing the old with the new is more than just a passing trend. There’s no denying the fact that we’ll always have a thing for the past yet crave every creature comfort of the present. In the design world, the neo-traditionalist style speaks to our nostalgia for a time gone by. 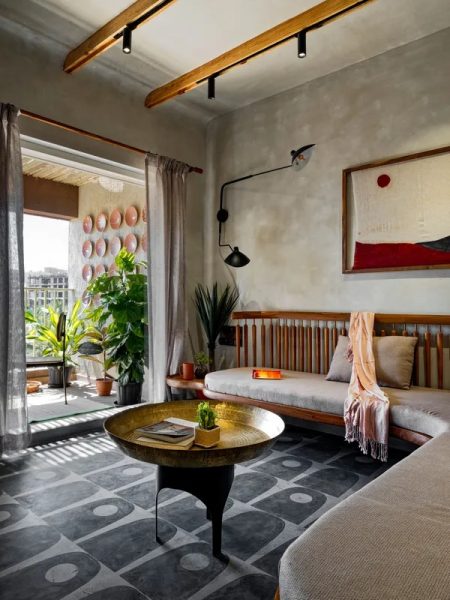 The Clients—a police officer and a doctor—wanted to have a home that took their work stress away, and made them feel comfortable and at peace. They realised the answer lay in the ancient Japanese philosophy of wabi sabi—the idea of celebrating things with their natural imperfections, just as nature intended. 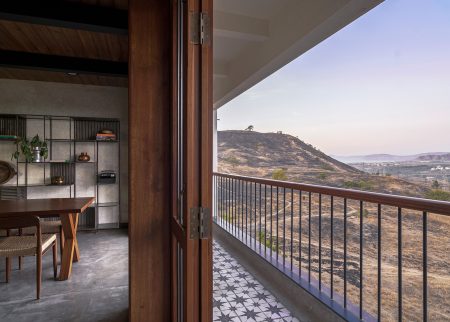 “There is too much architecture between me and the view,” said the late legendary architect Geoffrey Bawa, and we at Amoeba Design kept that in mind while designing this house. In fact, it would not be wrong to say that the entire design process for this house was driven by Bawa’s quote 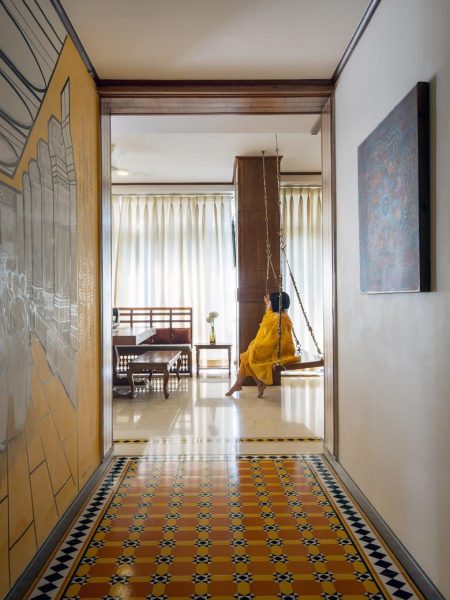 The modern homes of today are every bit in line with design trends, and are also able to adeptly balance aesthetics and functionality. But what they sometimes crave is that touch of traditional Indian elegance that comes from handcrafted furniture, locally sourced materials and ethnic accessories. 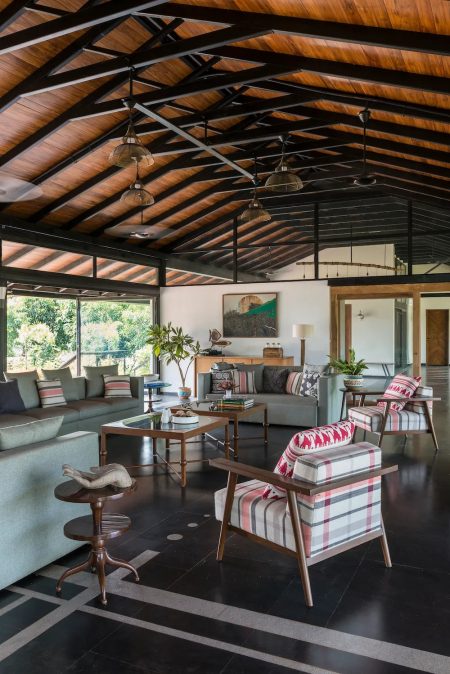 “With buying land, or a home, it’s always about falling in love at first sight,” says the homeowner. “I’m a typical guy from Mumbai, and very used to walls,” so when he came upon this plot just about two kilometres from the Ulhas River, he promptly fell in love: “The mango trees, the abundant sunlight and the sound of the river nearby made it happen.” 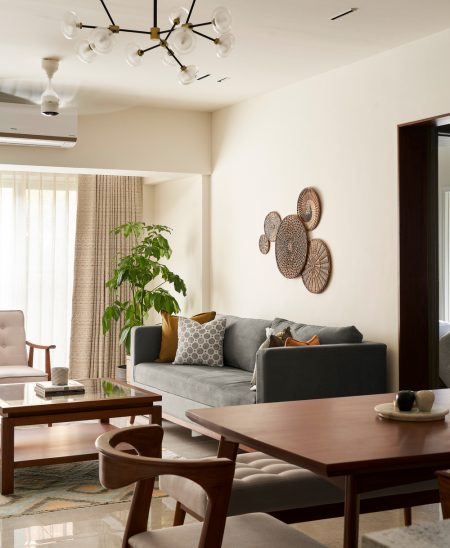 Located in Mumbai, this 750 sq ft two-bedroom apartment is the permanent home for a young couple and their 3-year-old son. The apartment is housed in a 30-year-old building and required complete remodelling. Given the tight footprint, the clients wished for a modern contemporary scheme that could breathe but at the same time addressed all their day-to-day, functional needs. 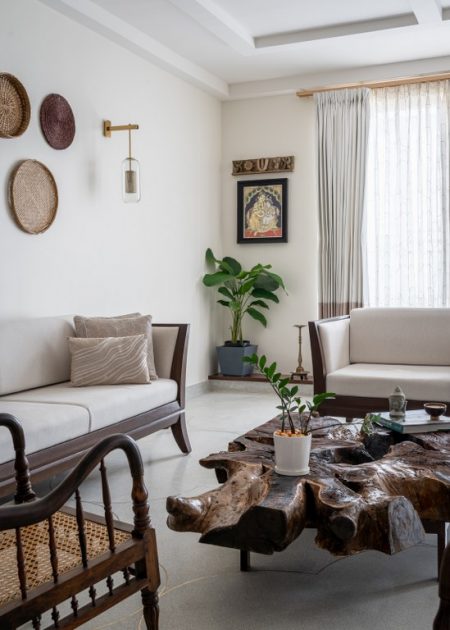 Studio Skapa Architects transforms a derelict Bangalore penthouse into a contemporary guesthouse immersed in Tropical Modernism, merging rooted Indian heritage and a contemporary persona into one. The thresholds amidst the past and present blur away with abandon, tipping its hat to the reimagined union amidst traditions and contemporary sensibilities. 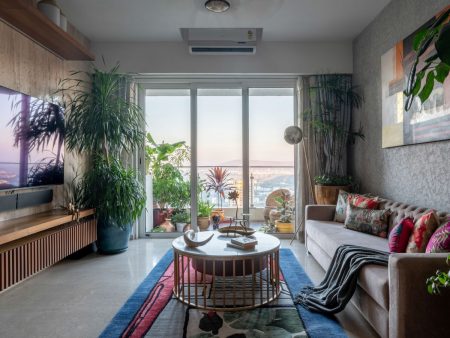 Overlooking the majestic eastern water front, one can see flamingoes at a distant salt pan in all their glory. A large part of the process of designing this intriguing apartment was about redefining the relation of the interior spaces with the outdoors. 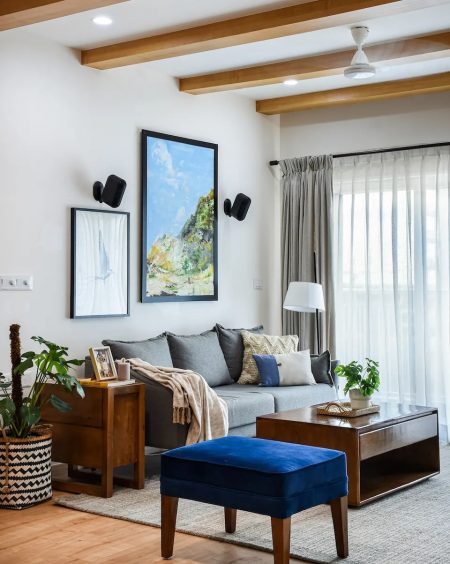 ‘Less is More’ was the grounding maxim for the design of this north Bengaluru apartment. This is articulated through modern geometry, natural materiality and a consistent colour palette infused with refreshing indoor greenery. More crucially, the home — aptly called Scandinavian Love — had to embody spirited freedom, and show resilience to the changing needs and aspirations of its occupants. 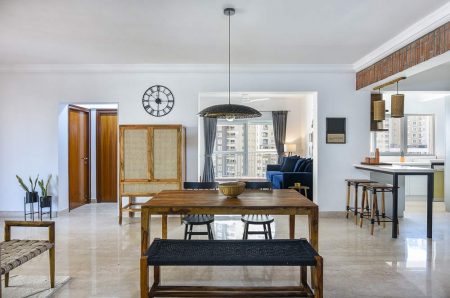 Clean lines, uncluttered, a monochromatic palette and a ‘less is more’ philosophy. These words best describe Tanvi and Abhiroop’s 2,850 square feet, seventh floor Bangalore home. The apartment, which originally had four bedrooms, was modified to facilitate an open plan living with a focus on form and functionality.

When a couple in their 60s envisioned their ideal abode, they wanted a home that reflected their penchant for travel and balanced the traditional and contemporary. Purvi Shah, principal architect, Purvi Shah Interiors, was enlisted to transform their three-bedroom at Hilltop Road in Worli, South Mumbai, into an abode replete with pastel colours and a curation of painting, artefacts, and furniture from their personal collection. 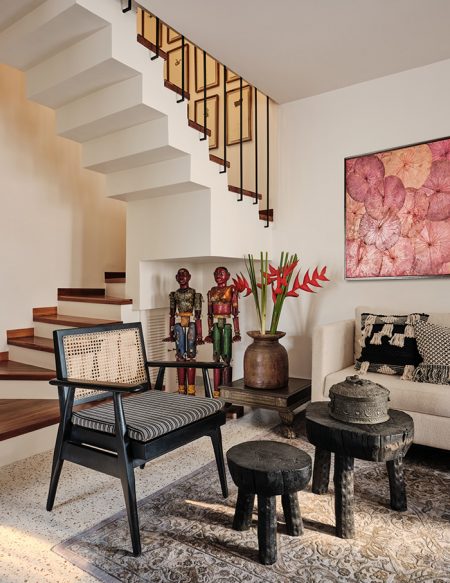 Designed for Radeesh Shetty, founder and director of The Purple Turtles and Beruru, Open-Plan Residence brings to life a penchant for detail, craft and heritage. We at Studio Ruh call it the result of an elated love affair with tropical modernism. 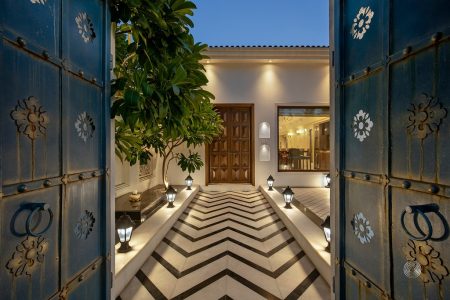 The “Shakti Bungalows” at Vasana Road, Vadodara is one of the elite projects by Ar.Ruchir Sheth. It showcases the true essence of royalty in the form of a Rajasthani theme perfectly blended with contemporary designs. The owners envisaged it to be a lavish bungalow on Rajasthani royal heritage theme, from upholstery to architecture, everything has been articulated to meet their needs in the exact same way.