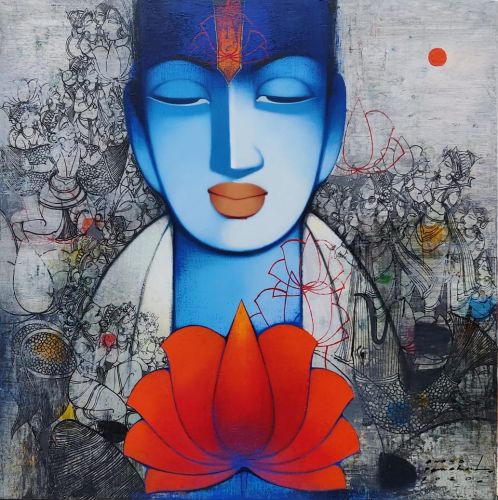 Artist, Anand Panchal : “I want to use varied colours in my paintings; above all my primary concern is the image expressions.”

Anand Panchal, Born on October 11, 1973 in Latur, Maharashtra. His works are in collection with many art lovers in India and abroad. Best known for his figurative artworks. He has developed a unique style of his own. He mostly paints children – capturing their innocence, animals and Brahmins in vibrant colours, which symbolizes calmness, peacefulness and spirituality.

Beauty, boldness, brightness and gorgeousness are some of the trademarks of Anand Panchal’s works. Best known for his figurative artworks, Panchal has over the years developed an unique style of his own, mostly paints Brahmins, and children with lots of innocence in them. Panchal’s paintings are quite narrative, showing the unfolding stories of rural life. In most of his paintings we see the figures enjoying each other’s company. Backgrounds merge with the subject of the painting, one can observe the scripts in the background; animals and birds; group figures, and also painted singularly. Application of colours is smooth and well finished. The colour palette is restricted to reds, blues and oranges. Foreheads are painted with orange or blue, to show the mood. Orange symbolizes spirituality and blue symbolizes calmness and peacefulness. Panchal has painted many panel format works.

Many of Panchal’s paintings are done in a long, narrow format, which he describes as mimicking the figures of the children that he is painting. In his paintings, the upper portion of the canvas is often devoted to iconic images that indicate the dreams of the foregrounded figure. In one painting, for instance, the background shows a house and a sun, indicating the opposing forces of home and nature.

Of his influences, Panchal names Rembrandt, Renoir, and Gauguin. In the future, he plans to try large-scale works of children in groups that incorporate more elements of the village setting.

“I believe, I have seen my country from close quarters and have tried to perceive it as such. I was brought up countryside; hence I have given prominence to rural culture and traditions in most of my works. India is a multicultural, multi – lingual nation with diverse traditions. The countryside of India has always fascinated me and is a main theme of many of my works. I had watched different rural games, rituals, and folk- dances as a child, which refreshes my childhood memories. Little boys and girls were selling toys, Firkees in village-fairs, children enjoying with excitement kite-sport in the narrow village lanes of which I too was a part all these past memories had taken place on canvas. One of my paintings is based on Hindu epic : The Ramayana. It is found in the Ramayana that Hanuman, brought herbal life-giving medicine to save life of Laxman. In present time I feel that Sanjivani booti the age old panacea is all around us. It is nothing but education, which should be given to the right sense for building the bright future. I want to use varied colours in my paintings; above all my primary concern is the image expressions.” 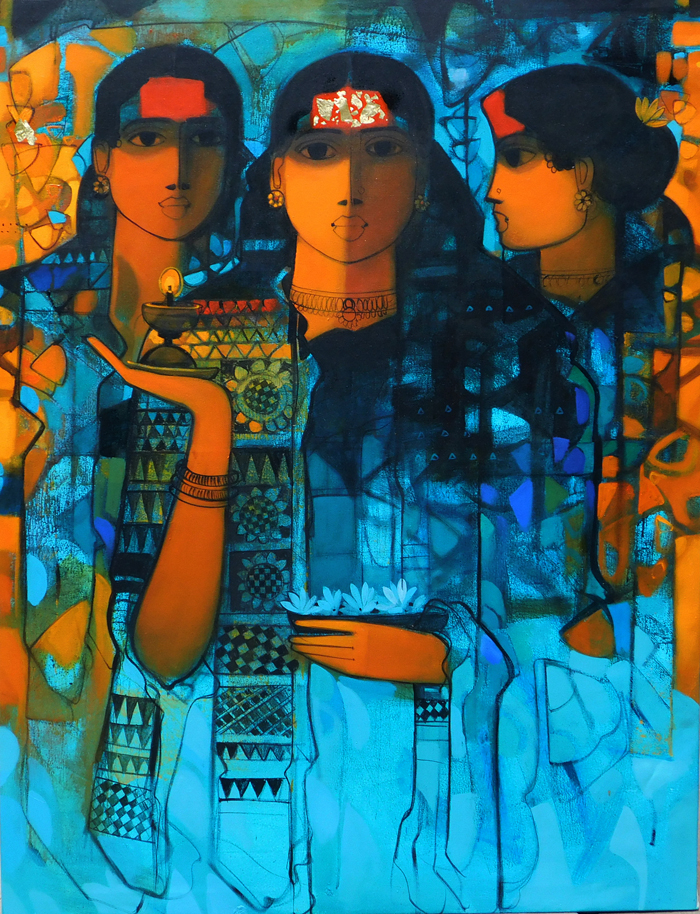 Artist, Sachin Sagare : “I like to use simple elements from nature like flowers, early morning sunlight, women in their colourful hues.” 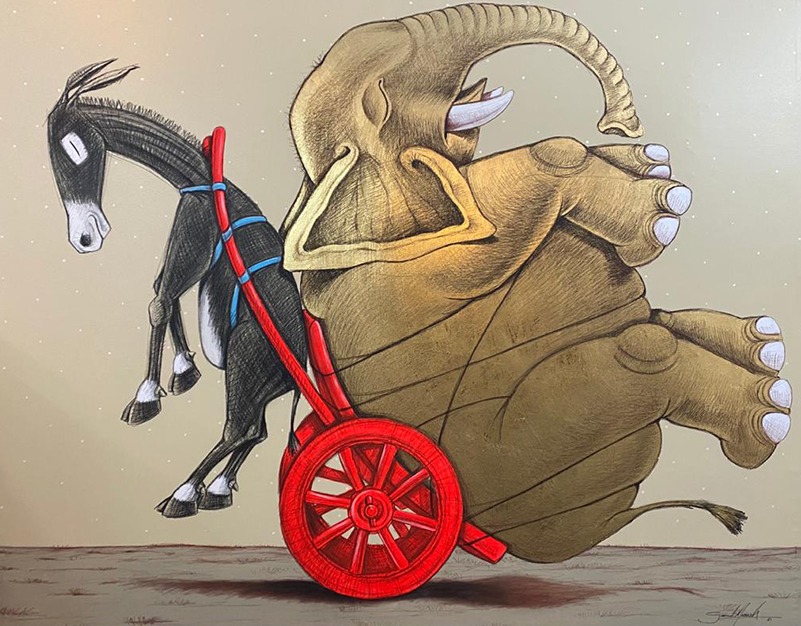 Artist, Gurmeet Marwah : “I use animals as symbols, as well as containers of emotive content.” 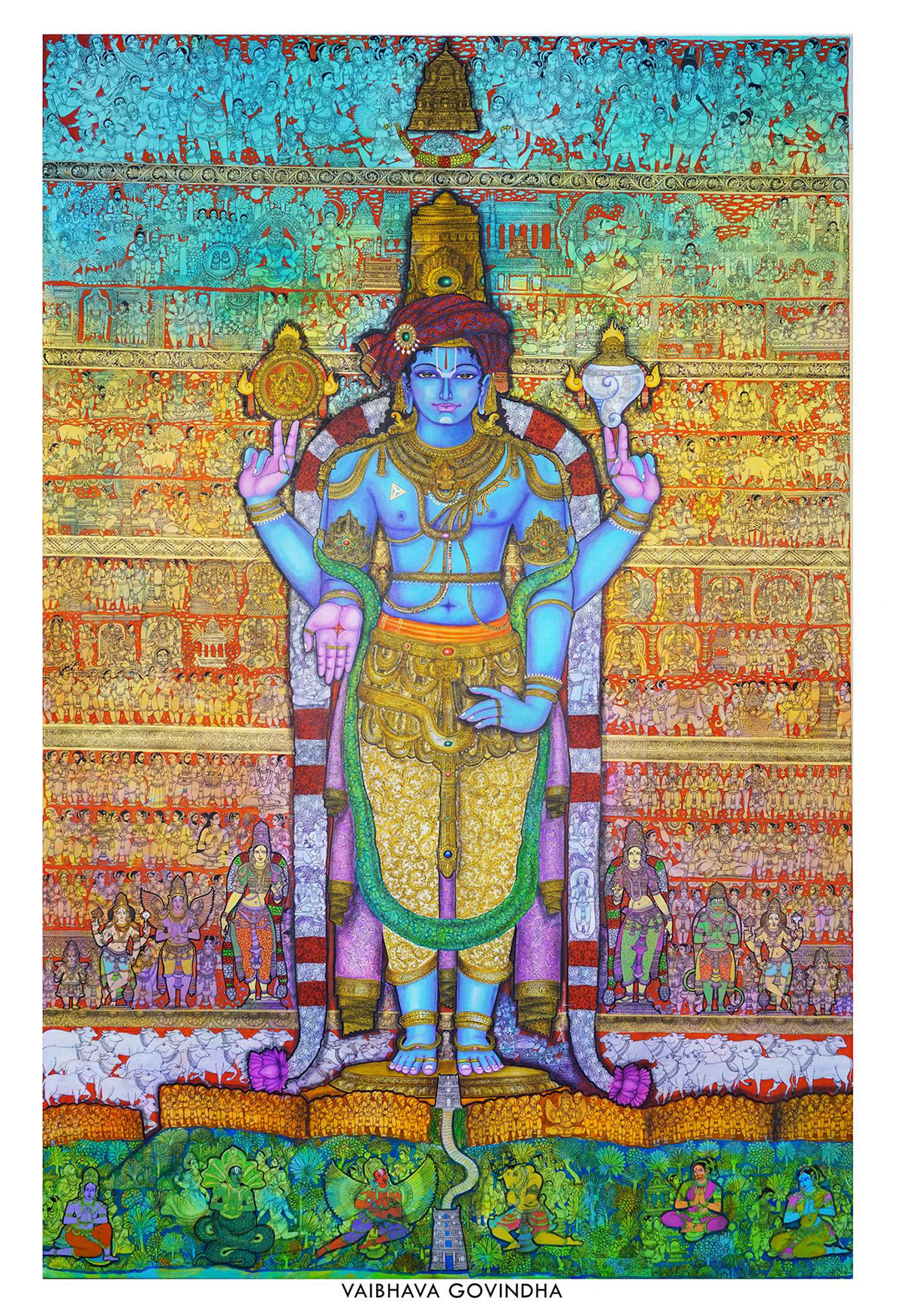